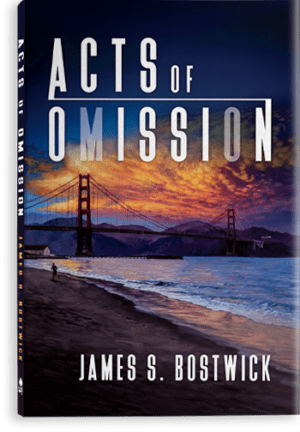 Thank you for joining me the other night to celebrate the success and paperback release of Acts of Omission. I wish we could have celebrated in person, but that wasn’t in the cards. I am grateful that we could still come together virtually. It was fun to see so many friendly faces, those that I have known for years and a few that I look forward to meeting. Your support means a great deal to me. Stay safe and please remember to write those reviews!

Thank you so much for being a part of the Acts of Omission Paperback Release party! If you were not able to attend to hear Jim’s talk and the BIG news about the book (too juicy to post here!) be sure to follow us on social media for more news about Acts of Omission and future speaking events: Facebook and Instagram. There is more to come!

The paperback edition of Acts of Omission will be released on June 9, 2020. Pre-order your copy online today from a local bookstore on Bookshop.org, or here on Amazon.com.

We will be celebrating the paperback launch of Acts of Omission via a Zoom Happy Hour Thursday, May 28th from 5:30 PM – 6:30 PM PDT and we’d love for you to join us!

Space is limited, so please register here as soon as possible: RSVP at Eventbrite.

Grab your favorite drink and join author James Bostwick who will share exciting news, answer your burning questions and give away coveted prizes.

If you’ve already RSVP’d, the Zoom link is in your confirmation email. Simply click on the Zoom link to join the party. If you didn’t receive the Zoom link, please email: actsofomissionbook@gmail.com.

The novel is inspired by a San Francisco case James tried in 1984 when he was a young lawyer and went up against one of the most famous lawyers in the country to seek justice for a young man with a devastating injury.

If you haven’t had a chance to read Acts of Omission yet, that’s okay, please still join in and you could win a signed, first edition copy or one of the first paperback copies!

It will be a wonderful celebration! Hope to see you!

Join author and nationally recognized trial lawyer, Jim Bostwick, for a Zoom Happy Hour on May 28th from 5:30-6:30 pm PDT to celebrate the Paperback Release of Acts of Omission, which was just nominated for the Harper Lee Prize for Legal Fiction.

Jim has some really exciting developments to share with you, he’ll also answer your burning questions, and give away a few coveted prizes.

If you haven’t had a chance to read Acts of Omission yet, that’s okay, please still join in and you could win a signed, first edition copy! The novel is inspired by a San Francisco case Jim tried in 1984 when he was a young dogged lawyer and went up against one of the most famous lawyers in the country to seek justice for a young man with a devastating injury.

Please RSVP here at Eventbrite. Spots are capped, so be sure to secure your spot! Once registered, you will have access to the Zoom link sent via email.

Grab a happy hour drink of choice, log-in to Zoom and we’ll see you there!

Save the Date!
Acts of Omission Paperback Release Virtual Party

Save the Date! Join debut author and nationally recognized trial lawyer, James Bostwick, to celebrate the paperback release of his legal thriller Acts of Omission Thursday May 28, 2020 from 5:30-6:30pm PT.

During the virtual happy hour, Jim will share exciting news, answer your burning questions and give away a few coveted prizes. We can’t wait to celebrate with you!

The party will be hosted on Zoom, with more details to follow.

Mark your calendar and we will be in touch soon!