James S. Bostwick, a well-known San Francisco trial lawyer, was nominated for the 2020 Harper Lee Prize for Legal Fiction for his debut novel, “Acts of Omission”. The Prize is awarded annually to a published work of fiction that best illuminates the role of lawyers in society and their power to effect change. Harper Lee established the Prize in 2011 to mark the 50th anniversary of “To Kill a Mockingbird”. Previous Prize winners include novelists such as John Grisham, Michael Connelly and Sharon Bala.

“This is a book that should be read by every trial lawyer, everyone who wants to be a lawyer, and anyone who wonders what it’s like to be a trial lawyer,” said Walter Walker III, a San Francisco trial lawyer and best-selling author. “Bostwick spins a powerful, informative tale drawn from real life. The courtroom scenes leap off the page and will have the reader cheering for justice.”

Bostwick, who is the founder of Bostwick & Peterson, has obtained multiple record results for his clients, including the largest medical malpractice verdict in U.S. history. He was inspired to write “Acts of Omission” to give readers a realistic ‘day in the life’ of a civil trial lawyer. It’s based on a true San Francisco case that Bostwick tried in 1984, painting an authentic and gut-wrenching picture of the dangers, risks and rewards when a young, dogged lawyer goes up against one of the nation’s most famous attorneys to seek justice for a young man with a devastating injury.

“Being nominated for the Harper Lee Prize for Legal Fiction is a great literary and professional honor,” said James Bostwick. “As a voracious reader of legal fiction, I was eager to write and share with readers an authentic portrayal of the risks, anguish and euphoria of everyday life for lawyers who represent victims of negligence.”

Published by Post Hill Press and distributed by Simon and Schuster, “Acts of Omission” is widely available in bookstores, on Amazon and through Audible and e-books. First edition hardcover is almost sold out, and paperback is available for pre-order now.

About “Acts of Omission”

Down on his luck after a string of lost cases and a recent divorce, personal injury lawyer Matt Taylor hopes his next trial will be an easy win. But when he meets a devastatingly injured young man desperate for help, Matt finds himself embroiled in an impossible lawsuit against Salvatore Conte, a powerful lawyer with sinister connections. Despite all warnings, Matt courageously pulls out all the stops to uncover the truth and right a horrific legal wrong. What follows is an epic multi-million-dollar battle of wills, intrigue, and outright violence that could cost Matt everything he cares about – his career, his family, his heart…and his life. For more information on the author and the novel, visit ActsofOmission.com 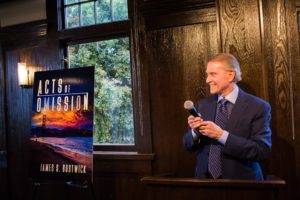 James S. Bostwick has been invited by many Bay Area bookstores to speak about his best selling first novel, Acts of Omission. James has spoken at the Book Passage- Corte Madera Store; Sausalito Books By the Bay; the Los Gatos Library, sponsored by Friends of the Library; Presidio & Concordia Golf Club; and for Bookends Book Club of Los Gatos (private residence).

Bostwick used his vast experience as a trial lawyer to provide a rare glimpse into the world of civil trial lawyers, what motivates them, the enormous risks they take, and the choices that define them professionally and personally. Bostwick is rated among the Top 4 Trial Lawyers by the California Bar Journal. He is also featured in Newsweek, Town and Country, and Forbes as one of America’s top trial lawyers.

The book has received exceptional reviews, such as this one by Walter H. Walker III, best selling author of The Crime of Privilege-

Acts of Omission is set in the Bay Area introducing us to Matt Taylor–a down on his luck personal injury lawyer who has lost his wife and a string of cases. His next trial needs to be an easy win. Instead he is embroiled in a complicated lawsuit up against a powerful attorney with dubious connections. Matt pulls out all the stops to uncover the truth and right a horrific legal wrong. Acts of Omission chronicles a multi-million-dollar battle of wills, intrigue, and brutality that could cost Matt everything, including his life.

To purchase a copy of Acts of Omission go to Amazon.com.

To schedule James S. Bostwick for an author talk and book signing at your bookstore contact: allysonwyles@gmail.com

James S. Bostwick is a nationally recognized trial lawyer with over fifty years of experience. He is one of the most respected medical malpractice and personal injury lawyers in the nation and the founder of Bostwick & Peterson. He is one of the few lawyers in the U.S. deemed a Certified Medical Malpractice Specialist by the American Board of Professional Liability.  In his first novel, Acts of Omission, he uses his vast experience to provide a rare glimpse into the world of civil trial lawyers, what motivates them, the enormous risks they take, and the choices that define them professionally and personally. 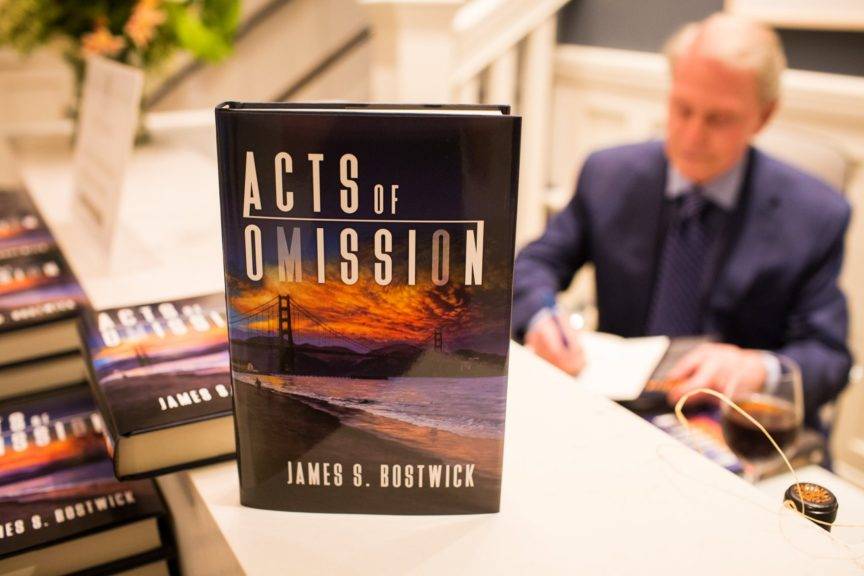 Mr. Bostwick is a member of the Inner Circle of Advocates, and invite-only organization and limited to the top 100 plaintiff’s trial lawyers in the U.S. (and considered the most exclusive trial lawyer organization in the world). He is a past President of the International Academy of Trial Lawyers, named to Best Lawyers in America every year since its inception in 1983, rated among the Top 4 Trial Lawyers by the California Bar Journal, and featured in Newsweek, Town and Country, and Forbes as one of America’s top trial lawyers.

Bostwick has spent more than 50 years specializing in complex medical malpractice and personal injury law, and has set the bar for litigating some of the most complex and high-stakes cases in the country, including in 1979 securing the largest medical malpractice jury verdict in U.S. history. He has spent the years since setting state and national records for high-value recoveries in legal malpractice, birth injury, and other personal injury claims. In early 2018, Attorney Bostwick and the firm obtained a $14M malpractice settlement just before trial over a neonatal brain injury. At the time, the result was the largest present value settlement in California history for a case that had not been tried to verdict.

James practices law with his son and with his law partner of over twenty years. He lives and works in the San Francisco Bay Area. 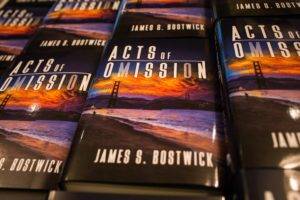 Acts of Omission, written by James S. Bostwick, is a searing tale of a legal system gone awry, where greed and power fight an unending battle against a young lawyer’s willingness to risk everything in his quest for justice.

Acts of Omission 1st edition hardcover, is almost sold out on Amazon.

You can pre-order the paperback, purchase on your kindle, or listen to Acts of Omission on Audible.

“…a masterpiece of courtroom drama…”

“…the best (book) I have read regarding civil trial practice.”

Click here to purchase your copy, in your favorite format, today: Acts of Omission by James S. Bostwick.