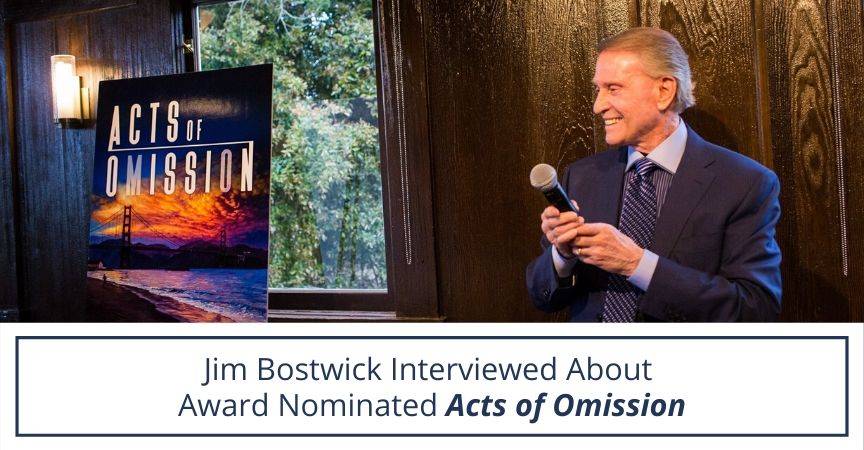 Jim Bostwick, author of Acts of Omission, discusses his decision to become a writer, the real-life inspiration behind his debut novel and his award nomination.

As a voracious reader of legal fiction, Jim Bostwick decided it was time to write his own novel, one that realistically depicts the difficult choices, high risk, ethical dilemmas, anguish and euphoria of everyday life for civil trial lawyers. Bostwick believes there are a lot of works that reinforce “ambulance chasing” stereotypes and present skewed or false views of the selection and preparation of trials, so after years of pondering writing a novel, he finally wrote Acts of Omission to correct that deficiency.

Acts of Omission is loosely based on a San Francisco case Bostwick tried in 1984 when he went up against one of the country’s most famous attorneys to seek justice for a devastatingly injured teenager. The novel not only gives you an insider’s look into the life of a lawyer but also delivers a twist-filled tale complete with intrigue, romance and one man’s heroic fight for justice.

Acts of Omission was nominated for the 2020 Harper Lee Prize for Legal Fiction. The prize is awarded annually to a published work of fiction that best illuminates the role of lawyers in society and their power to effect change. Harper Lee established the Prize in 2011 to mark the 50th anniversary of “To Kill a Mockingbird”. Previous Prize winners include novelists such as John Grisham, Michael Connelly and Sharon Bala.

Listen to Jim’s podcast interviews on Blog Talk Radio’s Feisty Side of Fifty and Gurvey’s Law with hosts Alan Gurvey and Kerri Kasem (daughter of radio icon, Casey Kasem, the originator of American Top 40 music countdown). You can also read Book Q&As with Deborah Kalb for exciting news from Jim!

The paperback edition of Acts of Omission is now available for purchase. Order your copy online today from a local bookstore on Bookshop.org.