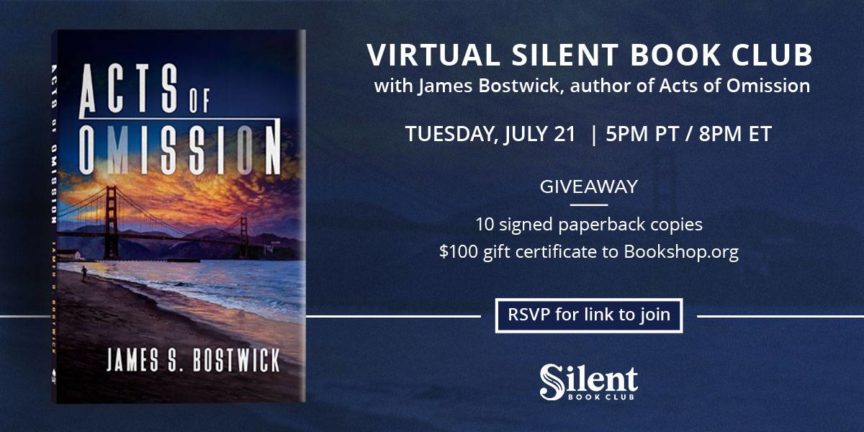 During the event, he will be giving away 10 signed paperback copies of Acts of Omission as well as a $100 Bookshop.org gift card to support local bookstores. You can RSVP for the virtual event here: https://bit.ly/ActsSBC.

Acts of Omission gives readers a realistic ‘day in the life’ of a civil trial lawyer. It’s based on a true San Francisco case that Bostwick tried in 1984, painting an authentic and gut-wrenching picture of the dangers, risks and rewards when a young, dogged lawyer goes up against one of the nation’s most famous attorneys to seek justice for a young man with a devastating injury.

Join Jim in a discussion about his decision to become a writer, the inspiration behind his the legal thriller, and exciting news of a sequel and movie deal. You can also submit your own question when you RSVP.

About Acts of Omission

Down on his luck after a string of lost cases and a recent divorce, personal injury lawyer Matt Taylor hopes his next trial will be an easy win. But when he meets a devastatingly injured young man desperate for help, Matt finds himself embroiled in an impossible lawsuit against Salvatore Conte, a powerful lawyer with sinister connections. Despite all warnings, Matt courageously pulls out all the stops to uncover the truth and right a horrific legal wrong. What follows is an epic multi-million-dollar battle of wills, intrigue, and outright violence that could cost Matt everything he cares about – his career, his family, his heart…and his life.

For more information about James Bostwick and the novel, visit ActsofOmission.com.